We strolled into the club 8+ dudes deep around 1 a.m. on our first Saturday night in the city — accompanied by a “concierge” that came included with the penthouse we rented on Airbnb.

This spot was his top recommendation for our first night out in Medellin, Colombia.

A seedy nightclub in Parque Lleras. A nightclub filled with hookers around every turn, geriatric gringos galore, and Colombian males from the coast.

We looked at each other, a common look of distain found on each one of our faces.

I looked into the eyes of some of the women dancing and prancing around. Selling their souls and ass for a little bit of cash. Dancing for degenerates looking to spend top-dollar for an evening of fun.

None of the girls had any “life” left in their eyes.

The life of hustle and whoring had drained them. Just like they attempted to drain the degenerates filling into the club every Saturday night. Errr, more like every single night.

It was time to GTFO — after 10 minutes inside the club. Go anywhere else. Even back to the crib.

But I knew Medellin, Colombia nightlife could be better than this.

I knew this wasn’t where we wanted to spend another second — acting like the club wasn’t revolting in every which way.

Stereotypes and preconceived notions. They influence how we behave in more way than we’d ever imagine.

When it comes to Medellin, Colombia, I’d visited the ‘city of eternal spring’ before. Multiple times.

Both trips were great, but I never was drawn to the city afterwards. I was never aching to get back to Medellin. Never looking up flights the minute I left trying to figure out how to get back to the promised land.

One time was on a quick trip with buddies, another coaching a basketball camp for a week in a finca just outside the city. An invite from one of my old college teammates. Then I came back to Medellin this year for nearly three weeks.

My expectations were low and I had zero plans to return to the city after the three weeks.

Well, mainly because of my preconceived notions.

I thought I knew the city well. I figured I’d been there before. I’d done that. I didn’t have much curiosity when it came to Medellin. There wasn’t much wanderlust upon arrival.

When combining my past experience with what I’ve heard about Medellin as of late, I had a lot of mixed ideas about how the city had changed over the years.

About how the city had been influenced by the vast amounts of foreigners rolling in each and every single day.

On one hand, the low cost of living combined with amazing views and the best weather in the world made me think about living in the city of eternal spring over the longhaul.

On the other hand, the insane amount of gringos, prepagos, and Paisa “gold digging” culture had me avoiding Antioquia like the plague.

I wanted no part in the “prepago shitshow” that many claimed Medellin had become these days.

Just not my ideal lifestyle.

So I came to Medellin with some stereotypes, some preconceived notions. Negative ones, if I’m being honest.

These preconceived notions turned out to be completely and utterly false.

In fact, I found myself loving Medellin, Colombia after about a week of living the good life in the ‘city of eternal spring’

I found myself contemplating cancelling my trip to Asia — to just stay in Medellin for the rest of the year. An idea I wish I would have pulled the trigger on.

Why was Medellin, Colombia so damn fun? Was the third time around truly the “charm” for me?

Well, here’s what made Medellin, Colombia so damn cool on my last visit:

Make no mistake about it…

The weather in Medellin, Colombia is about as good as it gets. You’re talking 75-78 degrees Fahrenheit in the afternoon each and every single day. Sunny skies. Mountain views.

Here’s how you know the weather is perfect in a city:

You can walk around in shorts to go to the gym and never feel cold. Or go on a date in jeans and a dress shirt without sweating as you walk a few blocks to the bar for happy hour.

You can walk around all day, everyday and never feel too hot or too cold.

They don’t call Medellin the ‘city of eternal spring’ for no reason, parcero 😉

Not only does Medellin feature amazing weather, but you’ll also find some of the best mountain views worldwide. Well, if we’re talking mountain views in a city filled with millions upon millions of people.

Truly stunning views can be found all around Medellin.

Plus, the city is filled with high-rise apartments to ensure you can wake up, brew a cup of coffee, walk out on your balcony, and take in the mountains as the sun comes up.

I mean just look at the stunning views found from my apartment during the last trip to Medellin: 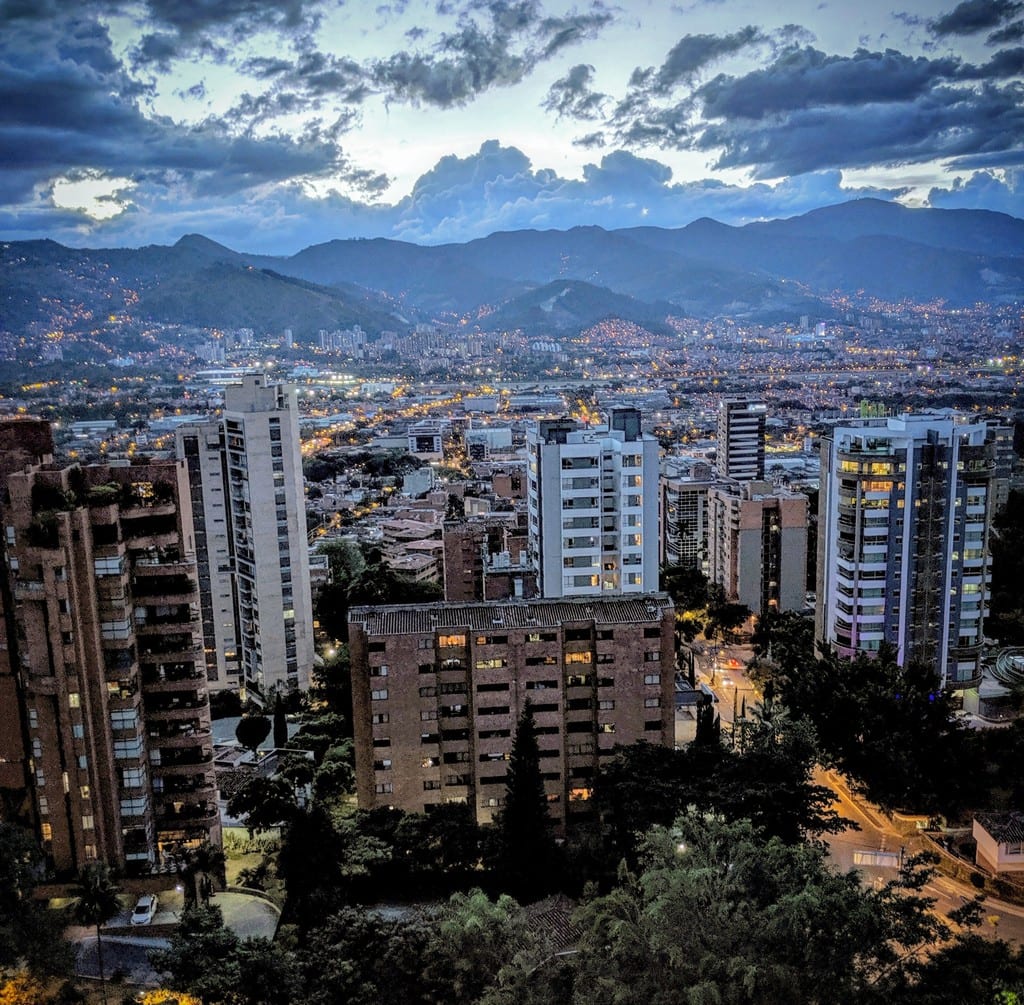 You can say a lot of things about Medellin and even about Colombia as a country, but it’s tough to be upset here when the weather is perfect and you wake up to views like this everyday.

While there’s tons of backpackers and even sex tourists in Medellin, there’s also a thriving digital nomad and expat scene here.

With a little social skills, you’ll be able to meet a number of cool people living in Medellin — many of them working legit corporate gigs or building successful online businesses.

Not exactly your run of the mill travelers.

This is a huge plus if you plan to stay in the city long-term, as you’ll want to meet some people living in the city and make friends that won’t be leaving in a week or two.

In my few short weeks in Medellin last trip, I was able to meet up with a handful of bros who called Medellin ‘home’ and pick their brain over beers — or even while hiking:

One thing about Medellin that anyone visiting the city MUST know…

It’s a whole new world when you speak some Spanish.

The thing about Medellin is the city gets hammered with tourists each year. Day after day, thousands of people come to the ‘city of eternal spring’ to enjoy the views, weather, and more.

But the vast majority of these travelers speak very little Spanish. So the locals are a bit annoyed about all the travelers visiting their city without being able to communicate.

By being able to have conversations in Spanish, you’ll find the Paisa people will be 10X more welcoming and your experience will be completely different to those who don’t speak the language.

Study Spanish for a month or two.

This here goes hand-in-hand with speaking some Spanish, but the reality remains…

Medellin is chalk full of prepagos and downright whores. Women looking to make money off their bodies in some way, shape, or form.

And as some of the prettiest girls you’ll find anywhere around, it can be hard to blame the Paisa beauties at times. But it can also be exceptionally annoying.

Luckily, it’s pretty easy to tell if a girl is a prepago or not in Medellin — and then avoid her if she is.

I thought the prepago culture in Medellin would have made dating in the city miserable, but I was mistaken here too. There’s tons of sweet Paisa girls who actively avoid being labeled as a pregago and many of them are sweet girls.

I’m taking nice apartments in high-rise buildings with stunning views for under $900 USD a month — on a short-term rental!

Eating a nice steak out at a restaurant with a view for under $10 bucks.

Uber rides for $2-5 USD anywhere in the city. Hell, even Copa America tickets in Medellin are cheap.

The list could go on and on, but there aren’t many better places in the world to live on the cheap then Medellin, Colombia.

With a budget of around $2,000-2,500 bucks a month, you’d have a nice place, full-time maid/chef, eating out/dates multiple nights a week, going out every weekend, gym membership, and enough money to travel domestically each month.

Oh, and yeah I did mention a full-time maid/chef there…

Runs about $400 bucks a month in Medellin.

Since Medellin is literally surrounded by mountains from every side, it’s pretty easy to get out of the city and into nature within 15-30 minutes.

I was able to go on multiple hikes just outside the city while in Medellin, a huge benefit while being in such a big city. Medellin might not have an ocean, but with all the great hiking opportunities found throughout the city it doesn’t really matter. Plus, many of these hikes feature waterfalls along the way.

This is a HUGE benefit for me.

For a city tinkering on 4+ million in the metro area, I expected traffic to be absolutely awful in Medellin. Surprisingly, this just wasn’t the case.

Sure, things can get slow around rush-hour on weeknights. But outside of those times, it’s quite easy to move around the city.

Often, it’ll only take 8-15+ minutes to get from one side of the city to another.

Huge benefit for travelers who enjoy getting out of their “bubbles” a few times each week and seeing new spots in the city.

Medellin has one of the best metro systems in all of Latin America.

Hell, it very well might be the best one in South America — although that could be debatable.

The Medellin metro system is probably one of the reasons traffic isn’t awful in the city. Most people use the metro system if they can get away with it, instead of driving everywhere.

I’m not a big public transport type of guy, as I Uber everywhere. But there’s no denying this made it easy to meet up with people from different parts of the city.

Outside of the Miraflores neighborhood in Lima, Peru and the Zona T/Parque 93 areas in Bogota, Colombia — I’ve yet to find a nicer neighborhood than…

The neighborhood is not missing for much.

Plus, there’s other great areas in Medellin too. Places like the Laurales and Frontera neighborhoods are both ideal for long-term living, as well.

P.S: My favorite area in Medellin? The Provenza area of Poblado!

Paisas truly have their shit together.

The metro system was one of the first steps. They just built a new tunnel through a mountainside — that shaves off 20-30 minutes of travel time from the airport to the Poblado neighborhood.

Paisas are continually investing in cleaning up their city and getting more tourists to visit.

Locals are focusing on education and the economy is continually improving. It’s pretty impressive, especially when you compare what’s going on in Medellin with other areas in South America.

Not only are Paisas business savvy and focused on improving their city, but the locals are also quite welcoming and friendly. Even though there’s tons of foreigners in the city, the locals are still welcoming and curious about why you decided to visit their stunning city.

I couldn’t recommend Medellin, Colombia enough — especially as a city to stay long-term.

With a decent budget and a solid grasp of Spanish, you’ll find the city offers more than most in Latin America.

I never thought I’d consider living in Medellin, Colombia for 6-12+ months, but I just might after my last trip to the ‘city of eternal spring‘ earlier this year.

Travel junkie turned blogger. Location independent. From the Midwest, but often based in Latin America. Big on beaches, rumba, and rum. Addicted to the gym. Committed to showing a different style of travel - one that involves actually interacting with locals and exploring different cultures.